My first encounter with the world of cinema was Rango – without Johnny Depp. A super – short – eight film which came with the camera and the projector when my parents invested in the equipment in the 1960s. A new world opened up and this film has remained engraved in my memory. First, I remember this little orangutan which was killed by a tiger – then came the buffalo with its long horns – it was a brutal experience for a little girl who grew up without the internet and who was exposed to tragic visual effects like those.
However, if the film first stirred up distress in me, it then made me laugh during the rewinding. Seeing my reactions, my father would show the film backwards and everyone, as they moved backwards, came back to life! The way tragedy was thus transformed into comedy provoked a delightful and reassuring feeling. It enabled me to keep the film Rango as a good childhood memory, according to the same principles found in Walt Disney movies in which – in spite of the underlying tragedy – things end up well.
The illustration on the box of the reel was the starting point when I painted #SuperRango. I chose to see the film after the painting was completed so as to draw only on my memories and the impressions I had kept. That’s probably why this painting led me to doing a number of digressions through associations of ideas. When I was little, I believed that Rango was filmed in Africa somewhere…and monkeys were monkeys…
I have not seen the film again ever since, yet it has regularly appeared in my memory and little by little, I have analyzed and corrected the mistakes –
The tiger does not belong in Africa and its name, Rango, obviously evokes the species – the orangutan. The film is actually three minutes and thirty seconds long. To me, it seemed longer but even if the backwards version is taken into account, it was in fact no more than six minutes long, depending on the patience of the other viewers. I was convinced that it was raining but there is not a single drop of rain. Perhaps it was the lush vegetation which triggered this idea of rain in my imagination, or is it the memory of all these defects on the film roll which passed before my eyes at full speed? Our version of Rango is actually a teaser for a very brief short film. In fact, it is fifteen minutes long and it was shot in Sumatra in 1931 by Merian Caldwell Cooper and Ernest Beaumont Schoedsack who created the famous film King Kong two years later.
On the illustration of the box are long-tailed monkeys, just like Pippi Longstocking’s, from the TV series which came out in 1969. Therefore, I believed for a long time that all monkeys had long tails.
In the seventies, I would see that some young people drove with a tiger’s tail hung to their windshield and I didn’t know that it was an advert for Esso at the time. I found it strange but most importantly, it reawakened the film Rango in me, in which the tiger plays the role of the bad guy. In this docudrama, there is indeed the man who grants himself the right to interfere so as to arbitrate – he sends the buffalo to avenge the little orangutan. It may raise questions about morality.
In the wilderness man’s intrusive behavior goes on – through deforestation and other aberrations – but I completed this painting with a positive balanced note – the tree which is marked as ready to be felled grows again. Like Tarzan or Superman, Rango is back, supported by a branch shaped like a buffalo’s horn and he swings, hung to a fake tiger’s tail, while the actual tiger is well alive.
As a final touch, I used a spray to outline a stylized human figure which goes forwards as the film is rewound – also an allusion to La Linea, created by the cartoonist Osvaldo Cavandoli, which was broadcast in the seventies and that I loved watching. With this figure, I wanted to allude to a number of man’s own paradoxes. In short, going forward sometimes means going backwards. It may be out of nostalgia or a concern and love for authenticity that disruptive elements such as hair or dust, as well as symbols and references which went by at full speed – just like rain on the film roll – can be considered as charming and esthetically pleasing today.
Just in the same way as what was considered as common tags spoiling the urban landscapes can be perceived as creative graffiti today. Street artists were often associated to illegal manifestations and created far from the art market network. Many street artists are recognized today. Paradoxically, some street artists’ works are sold at high prices in galleries and even exhibited in museums.
I punctuated with a hashtag, a universal and contemporary symbol to emphasize the fact that fundamentally, it is everyone’s business – the development, balance and harmony of the Earth. 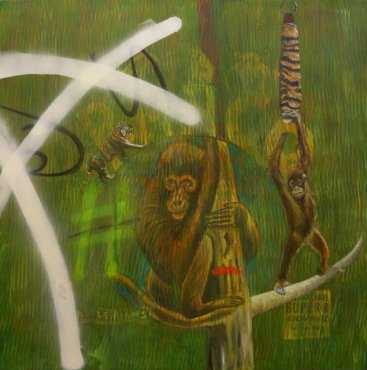 The starting point was the illustration on the box of the reel of Rango, a Super 8 film directed by Merian Caldwell Cooper and Ernest Beaumont Schoedsack, distributed by Castle Films, New York in 1931

Read about the purposes of #SuperRango below

Full version of the video #SuperRango