At home we had Asbjørnsen et Moe’s book – Tales for children, published by N.W. Damm & Søn in Oslo in 1948, with Birger Moss Johnsen’s illustrations.

On the cover Tro og Utro – Faithful and unfaithful can be seen. It is an illustration from one of the tales with the same title. It’s about the dreadful story of two brothers who have nothing else than a lonely and poor mother in common. When they become older, they naturally have to leave their home to become autonomous, but their path soon separates – after mutilating his brother – he bursts his eyes, Unfaithful abandons his brother in the middle of the forest. But this twisted story ends up as it should – it is Faithful who eventually marries the princess he well deserves and kindly rules the realm, while his wicked brother Unfaithful, who can be seen stuck and starving at the top of a tree, remains poor and miserable for his entire life.
The story itself is thus quite classic but the details are frightening enough, even for an adult.
What I remember above all however is that Faithful manages well thanks to surprisingly cunning animals who give him tips. These animals belong to the Norwegian forest – brown bear, fox, wolf and hare who all seem to get along well, chatting peacefully under a tree. It was obviously nicer to identify with them.
This illustration was thus the starting point for this painting and I allowed myself to extend the story by removing or adding elements which resulted from it or which appeared later in my life. Thus, Unfaithful, the embodiment of evil, quickly disappears from the image – even when armed, he is powerless. He rapidly transformed into a gorilla, a much more peaceful animal, as I had Gorillas in the Mist in mind. Each viewer will interpret in their own way the following stages and the painting as it looks when “finished”. And why not go further? I chose to stop at a point where my childhood memories and the experiences of my adult life meet – a kind of here-now.
Some elements remain engraved in my memory and go through the stages while remaining visible at all times, as if they were petrified on the spot in spite of the surrounding modifications. My painting leads me to travel in time and space, from north to south, between my memories and my dreams, between nature and culture and inevitably towards climate change and its consequences.
I stopped within a moving process… 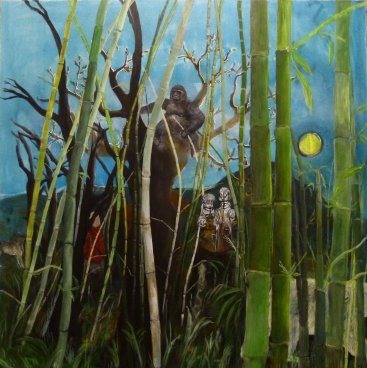 The starting point was the illustration on Eventyr for Barn (Tales for children), published by N.W. Damm & Søn in Oslo in 1948, with Birger Moss Johnsen’s illustrations.

Read about the purposes of Tales for children…and adults below